Although Ramakrishna Math and Ramakrishna Mission are legally and financially separate, they are closely inter-related in several other ways, and are to be regarded as twin organizations. These organizations form the core of a worldwide spiritual movement (known as Vedanta Movement in the West), which aims at the harmony of religions, harmony of the East and the West, harmony of the ancient and the modern, spiritual fulfillment, all-round development of human faculties, social equality, and peace for all humanity, without any distinctions of creed, caste, race or nationality.

Swami Vivekananda acquired a piece of land at Belur on the west bank of the Ganga, eight kilometers north of Kolkata and started the monastery. A beautiful temple of Sri 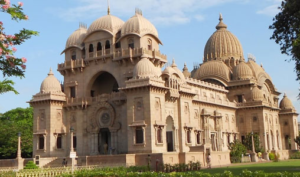 The Math and the Mission together have 171 branch centres all over India and in different parts of the world.

The main activities conducted by the Ramakrishna Math and Mission are:

Relief and Rehabilitation Work: Right from 1897, when Ramakrishna Mission was founded, it has conducted extensive relief operations for the victims of natural disasters such as cyclone, flood, earthquake and fire almost every year and man-made troubles like riots etc.

Medical Service: The Math and Mission has more than 15 hospitals, 120 outdoor dispensaries and 46 mobile dispensaries meant for the poor and they mainly serve in rural and tribal areas. Besides these, a considerable number of medical camps are conducted where thousands of patients are treated and more than 3000 operated on for cataract free of cost every year. Five nurses’ training centres where about 400 students are trained in nursing every year. Two old-age homes for men and one for women are also maintained.

Rural and Tribal Work: The Math and Mission run 3 institutes of agriculture and 4 rural development training institutes. Besides, farmers are taught improved methods of cultivation and also provided with agricultural inputs and financial help. Projects such as construction of pucca houses, wasteland development, planting of fruit and forest trees, etc are undertaken. Drinking water is provided by digging borewells and tubewells.

Welfare Work: Both the Headquarters and its branches provide scholarships and stipends to a large number of students, medical aid to poor patients and monetary help to aged and destitute men and women.

Activities for Youngsters: In all the educational institutions run by the Math and Mission special attention is paid to character-building and spiritual orientation of students. Apart from this, many of the branch centres conduct programmes for youngsters which provide recreational, cultural and spiritual activities for them at stated periods outside their school and college hours. The range of activities include chanting of hymns, devotional singing, participation in literary activities and games, instruction on character-building and ethical life, telling stories about great people, etc.

Spreading Religion and Culture: This is accomplished through a large number of libraries, lectures, discourses and seminars, audio-visual units, exhibitions, museums, retreats, and publishing books, journals etc. The Math and Mission publish 18 journals in 12 languages. Books on Vedanta, the message of Sri Ramakrishna, Holy Mother Sarada Devi and Swami Vivekananda, spirituality and world religions in almost all the major languages of India and in some of the important languages of other countries are published from the 21 publication centres. In English alone more than 700 titles are brought out. Hundreds of titles have been brought out in almost all regional languages, including some tribal languages.